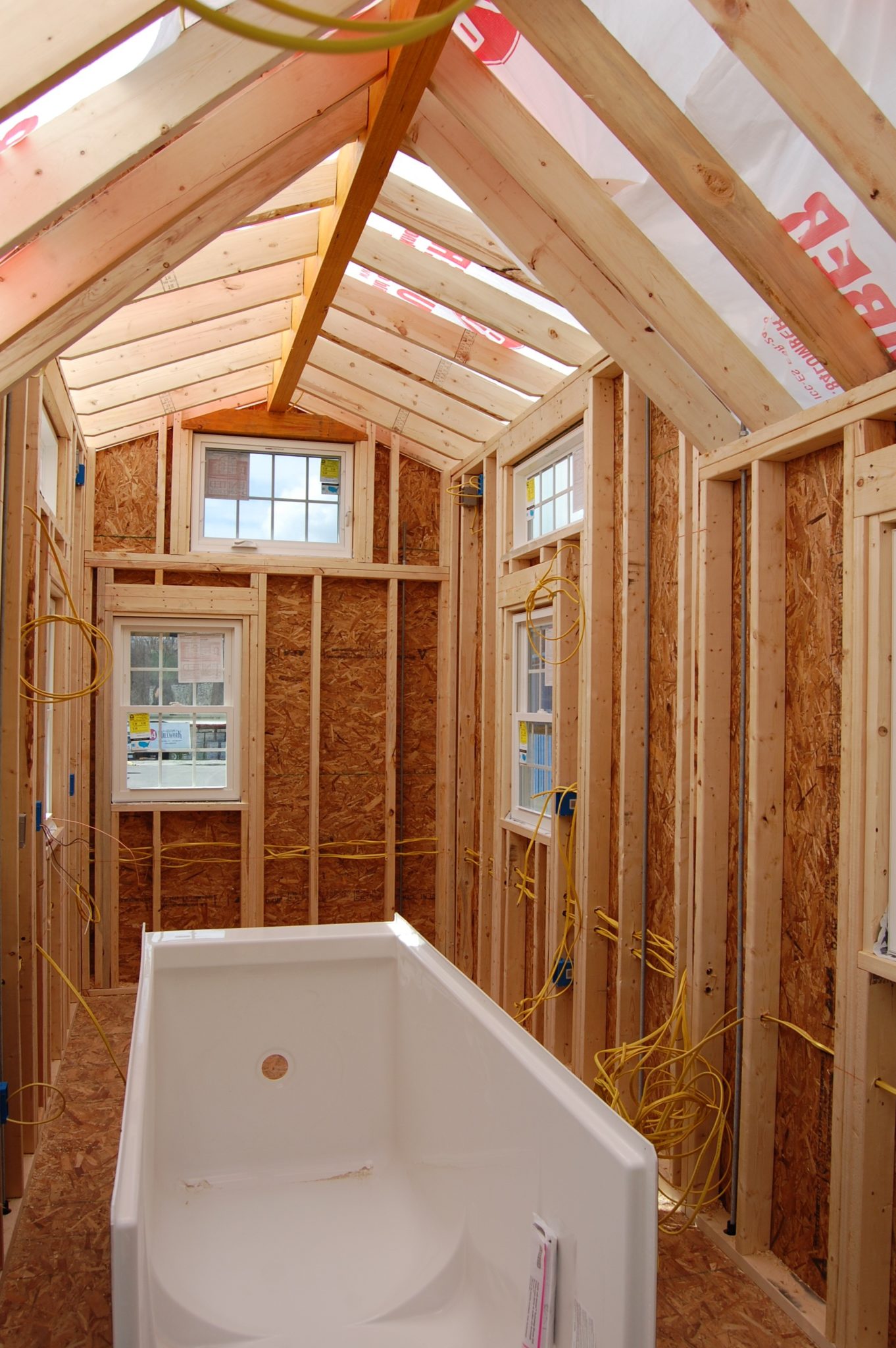 The Shonsie’s interior layout is similar to our Roving model. However, the Shonsie features lighter interior tones, exposed rafters, a glass sliding door and an enclosed porch area. 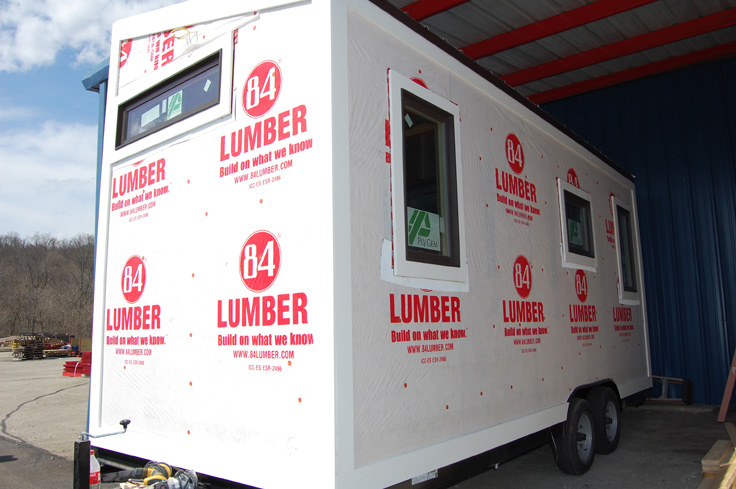 Our Degsy model features large amounts of natural light thanks to the oversized Ply Gem windows throughout the space. 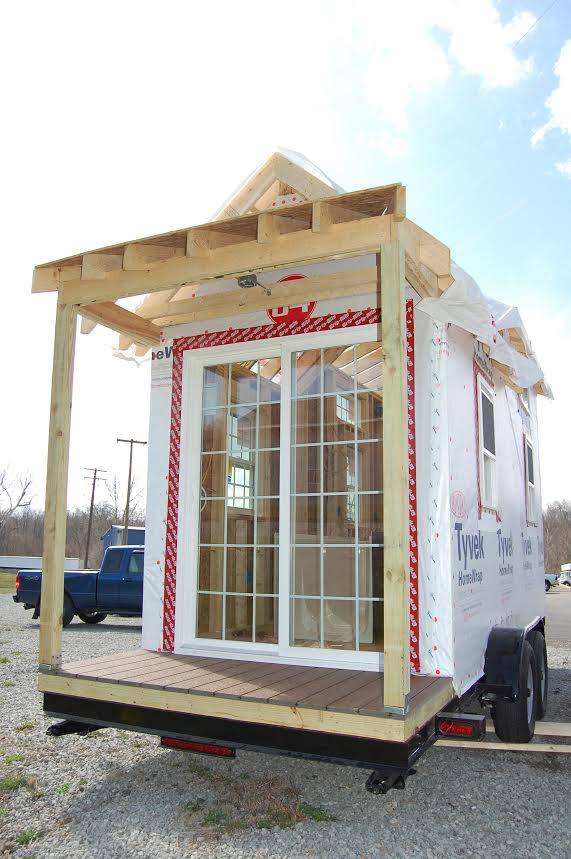 Welcome to the Shonsie! Follow along with us as we post pictures of the building process. We can’t wait to reveal the final product to you! 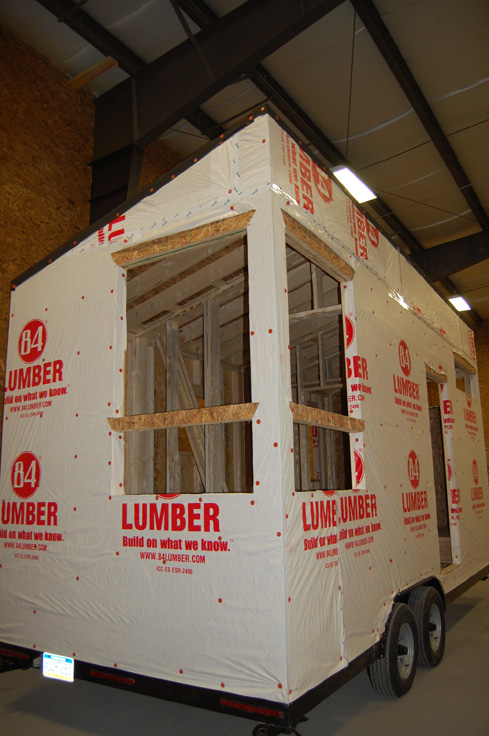 We are wrapped and ready to go! Now that the exterior wall sheathing has been secured, we have added housewrap for the underlayment of the siding….. In addition to the wrap, ice and water shield is placed for a layer of protection before the roof is installed. We make sure to take these necessary steps to ensure your tiny house is protected from all weather elements! 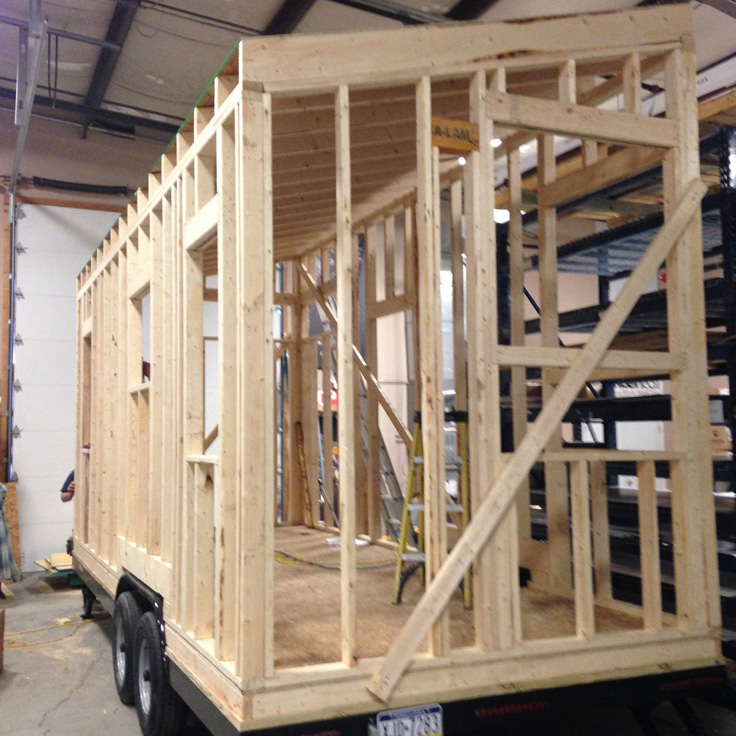 Framing is going up by our team in the 84 Lumber Custom Millwork Shop! 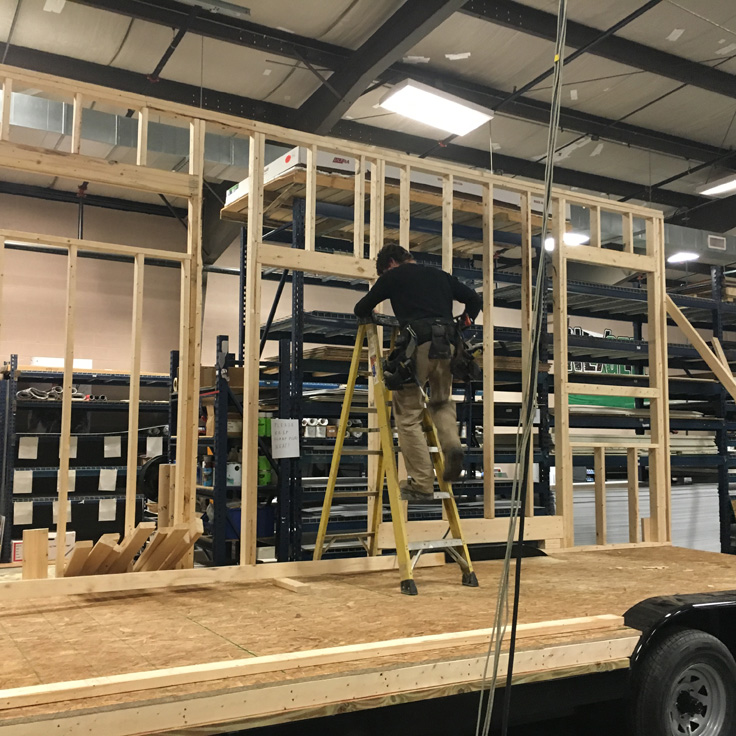 Now that we have the floor insulated, we add OSB sheathing to the floor and we are ready for framing. The Degsy model is actually built over the wheel wells which gives you more usable space inside! 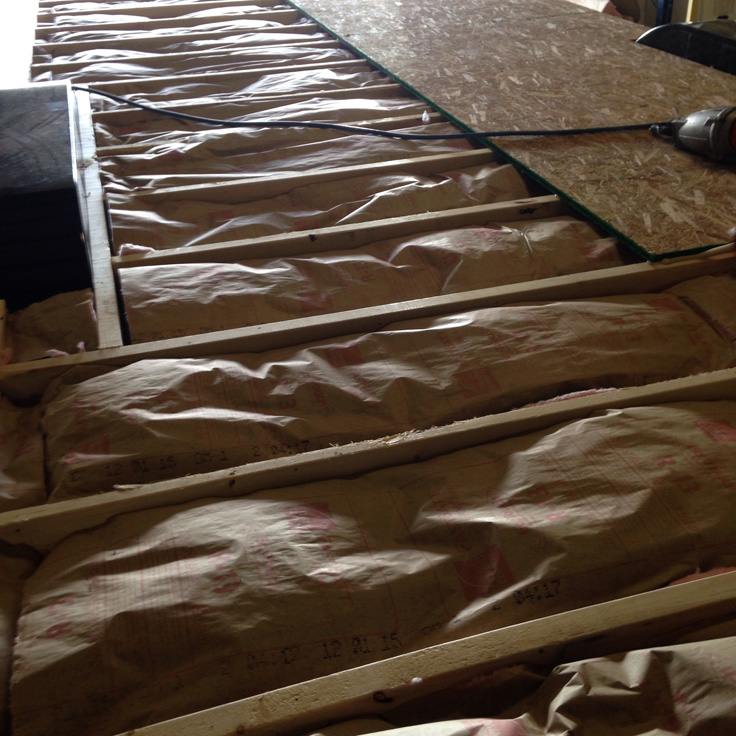 After the metal sheathing is applied to the trailer, we frame the floor and use 3.5″ fiberglass insulation to keep cold air from coming up through the floor. 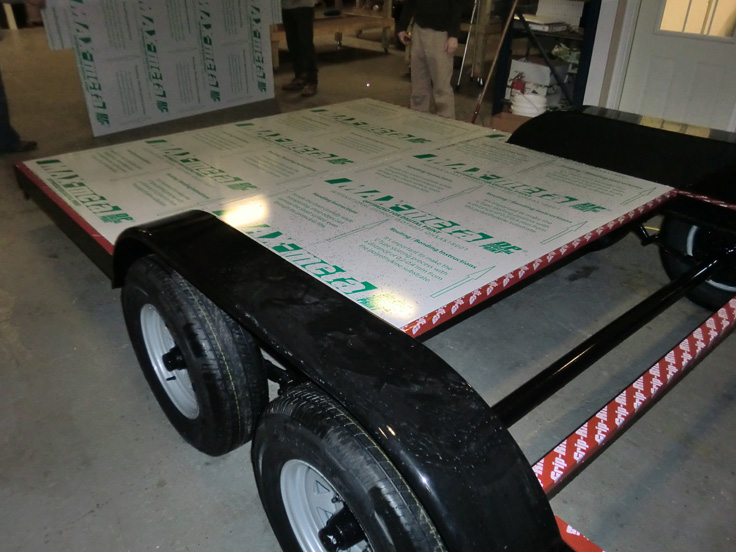 Our first step is to apply 1/8″ aluminum sheathing directly onto the trailer which keeps anything from getting up under your Tiny House and is the start of the floor system! 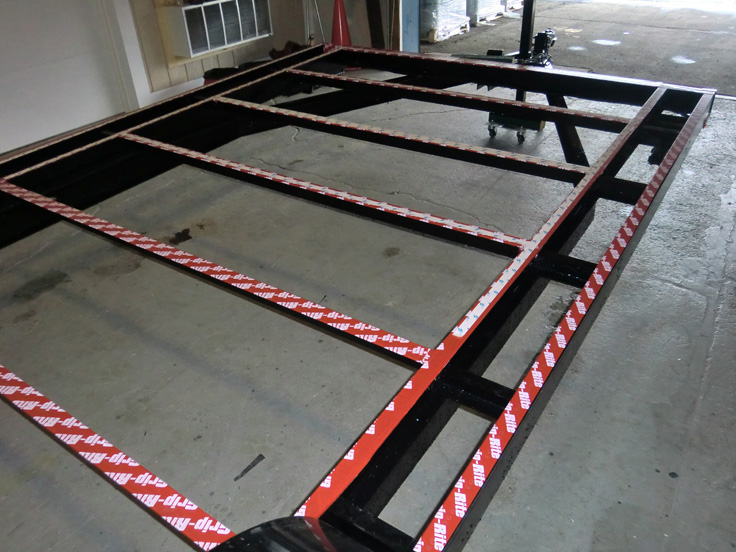 Welcome to the Degsy! Follow along as we post progress pictures of each model being built! Watch how our Tiny Houses go from Trailer to Fully Outfitted! 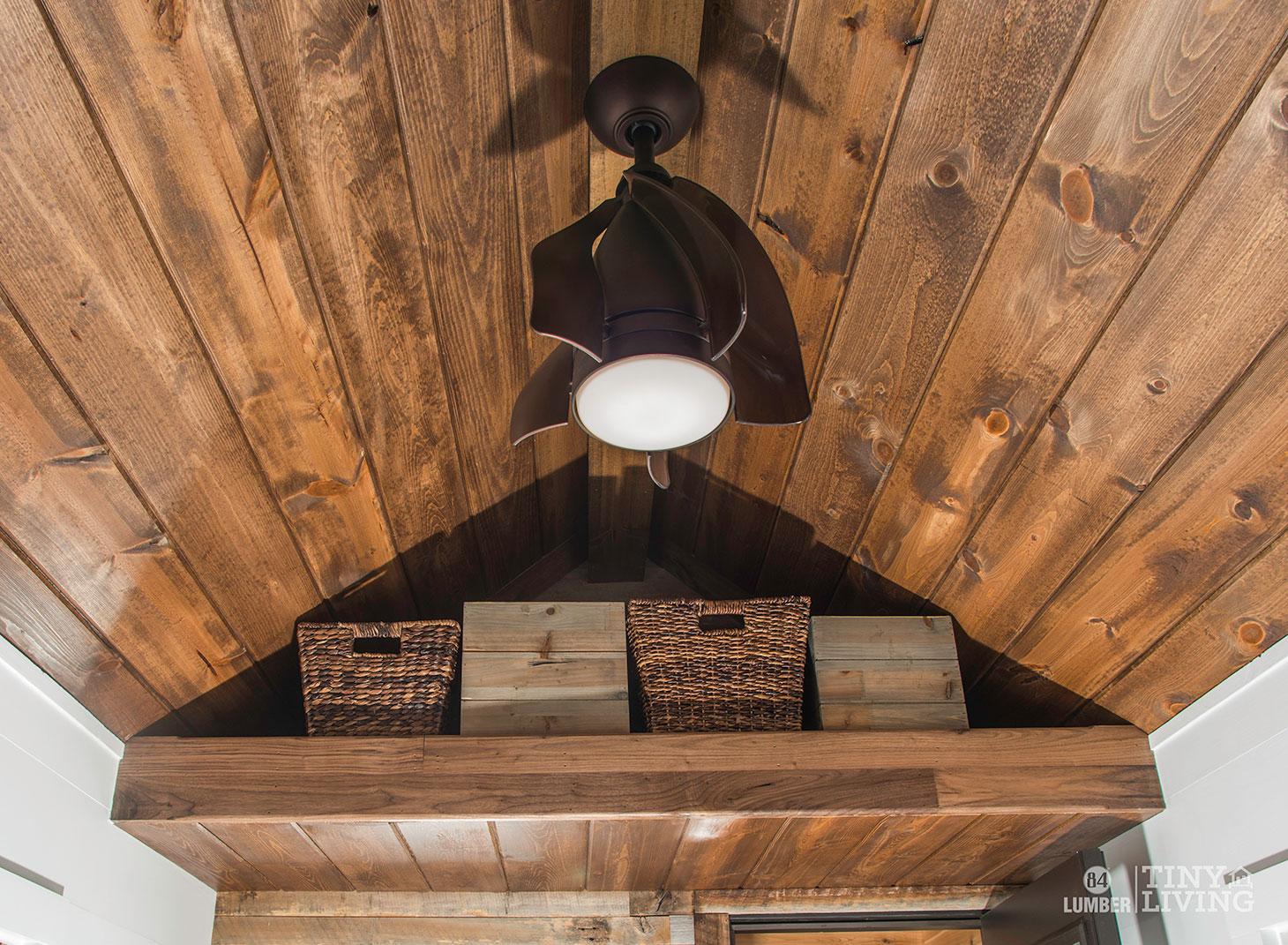 Tiny Houses for the Masses

If you thought the tiny house movement was just a fad, think again. 84 Lumber, a major national retailer of building materials and services, just launched a series of tiny houses, available in flexible packages targeting anyone who might be interested in this lifestyle. In other words, 84 Lumber is out to make tiny house living as accessible as possible, whether the customer is serious DIY-er or somehow who just wants a fast, easy turnkey micro home.

The company, which already offers building packages for structures like barns and garages, spent the last half year developing the line of four tiny house models, all of which are under 200 square feet and are now available to order, with an estimated turnaround time of about 8 to 10 weeks for a fully outfitted home.

The Roving, the first model with a fully built-out prototype (available to tour at the company’s headquarters in Eighty Four, PA), is a 154-square-foot tiny house with cedar lap siding, a lofted full-sized bed, mini front porch, and reclaimed wood details. The other three models, two of which are shown in the visualization below, range in styles from the more cottage-like to the more modern.

Beyond the design, 84 Lumber’s “cater to everyone” approach also extends to the packages and pricing. For those who are ready to roll up their sleeves and build their own tiny house, the company is offering a $6,884 (starting) “DIY package” that includes architectural blueprints, materials list, and a trailer outfitted with a subfloor and ready for walls. Next level up is the $19,884 (starting) “Semi-DIY package” that includes a “shelled in” tiny house on a trailer, along with windows, a door, a shower, and blueprints and a material list for finishing the home inside and out. And starting from $49,884, the move-in ready option comes fully furnished with a trailer, composting toilet, Energy Star-certified appliances, and LED lighting.

In the realm of tiny houses under 200 square feet, these price points are competitive, though neither radically affordable nor outrageously pricey. For comparison, there are a few move-in ready homes of comparable size offered in the $40,000 to $47,000 range, as well as custom-designed tiny homes that start at $79,000. Still, 84 Lumber’s tiered packages and national footprint—the tiny houses can be ordered in any of its 200 stores around the country—should certainly bring another level of accessibility.

The missing part of the puzzle is, of course, the tricky zoning stuff—that is, where, if at all, will cities allow people to park and live in these tiny houses, and not just as second dwellings attached to primary residences? As the crop of tiny home ventures (Rentable rural micro retreats! Eco-friendly pod dwellings!) continues to expand though, surely communities will soon have to take a stance.

Happy 4th of July! Wishing everyone a happy and sa

Today we remember, honor and salute those who gave

Have you checked out our blog? We regularly post a

There is still time to enter for our Operation App

​​Everyone can make a difference on #GivingTue